[January 2021 update] From 31 January 2021, Dropbox will shut down Dropbox Showcase for all users. If you want to migrate to a different Showcase before then, get in touch and we'll help you make the transition to Showcase Workshop!

You might be sitting with a befuddled look on your face — Showcase reviewing another product called Showcase? Is this some weird Inception, meta thing?

Well kind of, but not quite. In 2017, Dropbox released a new product called Dropbox Professional which came with a new feature called Dropbox Showcase. Naturally, we were keen to check it out — mostly because it contains the word "Showcase" and we knew our customers would ask us about it and expect us to know how it works.

Dropbox describes DB Showcase as “a new way to present your work in a single, professionally branded page — a great tool for designers, salespeople, and marketing pros.”

We did some exploring and got into the nitty-gritty of what this new feature is, and how similar we are — besides the name.

Building your own showcase in Dropbox is user-friendly and straight to the point. From the get-go, it looks like you're building components of your own web page. There are only four sections to organize and they all have handy action buttons on them, so there’s really no messing it up.

The four components are: 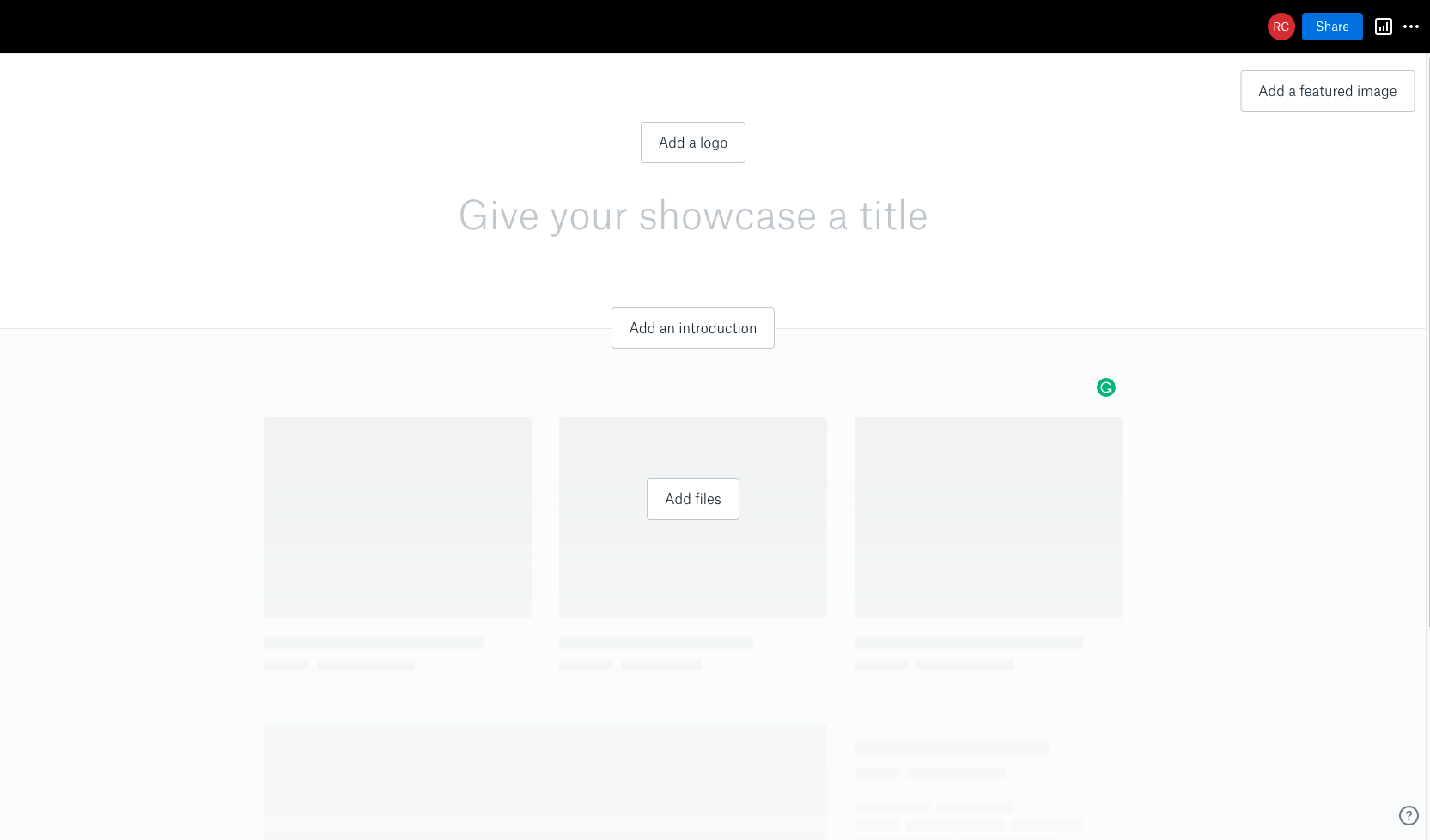 They’re base settings and cannot be moved or changed — something to be wary of. Having a feature image is nice and could be really cool if you’re pitching aesthetically-pleasing products, or want to show off some of your best work!

The arrangement of files is pretty darn cool. The aim of the game for these showcases is to display your files/images/whatever you upload, into a formation that reflects how you want them to be accessed and viewed.

You can arrange all your files in exactly the way you want, then add context with an intro message and file captions.

Having a play with the alignment of files is fun and really allows you to create a professional looking page of content - rather than a bunch of tile display files in a row, which can be overwhelming.

However, you can't make folders or different pages so everything is all on the main page.

As far as I can tell, with my random trial uploading, they accept most file types apart from GIFs.

Your Dropbox Showcase analytics are accessed inside the showcase by clicking a graph icon. Once inside, you can sort analytics by Files or Viewers. Unfortunately, there's no additional option here, nor can you add your own.

The analytics are fairly minimal, but if you want the basics of who read what and how many times, then its straight to the point. Under each section, there is a list of three different titles: views, comments, and downloads.

You can filter under each file name or viewers. Viewers can filter by name or email address and files by title or filename. You can see your total showcase views, comments, and downloads but that's about it.

In short, the analytics are good if your main objectives are tracking who reads/opens your content, and what parts of your content are most popular. They don't go into much depth, though, and there's no option to export the data.

The Sharing settings are pretty basic. You can set your settings to either: “Anyone with a link can comment” or “Only people invited to this Showcase”. In each showcase, there is a share button where you input your recipient's email and your message to be sent along with your showcase.

You can also import all your contacts from your Google account, which is a nice feature.

On the other end, when your recipient receives the email, the email itself has your featured image, logo, introduction blurb, the title of your showcase, and the total number of files in the showcase.

It's easy to hear the name and wonder how close we're going to be but the good news is we're more like distant third cousins once removed, rather than twins. The contrast between us is obvious and we have more differences than similarities.

Dropbox Showcase lets you share all your work in one professionally branded page; it's marketed itself superbly to those who have portfolios and extensive work to share in bulk.

Showcase Workshop is a complete sales toolkit. It's more than a one-pager, and you can literally build it to fit whatever your needs may be. There's no mandatory design or layout — the Showcase world is your oyster!

We give you outlandishly in-depth analytics and extensive sharing capabilities. Plus, you can access Showcase seamlessly from your Apple, Android, or Windows 8.1+ device – including your tablet, phone, laptop, or desktop. Us, in your pocket at all times? Pretty darn handy.

[January 2021 update] From 31 January 2021, Dropbox will shut down Dropbox Showcase for all users. If you want to migrate to a different Showcase before then, give us a bell at helpdesk@showcaseworkshop.com and we'll help you make the transition to Showcase Workshop!

P.S. Are you sick of the word showcase yet?

On principle, sequels are usually awful - remember Grease 2? Yeah… it was bad. But luckily for you, this sequel blog post will be riveting, informative, and better than Michelle Pfeiffer in leather

Once upon a time when dinosaurs roamed the earth, to present your business to a potential buyer you had to slog around a briefcase full of promotional documents, sample products, and Filofaxes (remember